So I was pleasantly surprised to see this little waste disposal unit for recycling outside the Builders Trade Depot off Umgeni Road in Durban.
If you know of any other places to recycle the rubbish that shouldn't be dumped in a municipal dump, feel free to leave a comment.

edit: Check out this post on The Art of Engineering about the problem of eWaste in SA.
at November 29, 2010 6 comments:

I was recently contacted by the Duiwenhoks Conservancy to spread the word about a book that they have put together about South Africa's quite unusual Limestone Fynbos.


Limestone Fynbos is an intriguing flora that occurs on South Africa's southern coast, wherever there are limestone hills or cliffs. Most of the plants occur in a broad sweep from Gansbaai to the Gouritz River, including pockets at Cape Point and Macassar. This flora can be divided into three natural units, Agulhas Limestone, De Hope Limestone and Canca Limestone.

Limestone Fynbos is floristically very different from other vegetation. The reason for this is that these plants thrive on a soil type that would be toxic to most fynbos plants, which are normally found on acidic or neutral soils.  They grow on limestone soils, which are so alkaline that if you squeeze lemon juice on them they will fizz. It is this alkalinity in the soil that is toxic to most fynbos plants. In a remarkable adaptation to a hostile soil environment, Limestone Fynbos has evolved as a unique flora that shares only a few species in common with sandstone fynbos and sand fynbos. As one would expect from a flora that is confined to such specific soils, many plants are endemic, meaning that they grow only on such soils or even at only one locality.

At first glance, this little-known flora appears as dry woody scrub. On closer inspection a fascinating array of intriguing and sometimes tiny flowers emerge. Over the past ten years, the author Louisa Oberholzer began collecting, describing and photographing the plants in the Vermaaklikheid area of the Western Cape ( Near Stillbaai). The Duiwenhoks Conservancy provided financial support for the identification of the species and finally for the publication of the book, Limestone Fynbos of the Vermaaklikheid Area. It presents a photographic record and description of 124 species. Of particular interest are the intriguing Fabaceae, or pea-like flowers and the pungent buchus, which belong to the Rutacea or citrus family.

The book is priced at R130.00 available from the Duiwenhoks Conservancy, (info@duiwenhoksconservancy.co.za) and also from the author, (louisa.stanford@gmail.com)


This book is an important vehicle to inform the public and particularly landowners about the value of Limestone Fynbos and the importance of controlling alien vegetation, which is a major threat to all the fynbos plant communities. As people see its value, this little known vegetation type will hopefully be better protected.
at November 25, 2010 3 comments:

Behind The Scenes - Minimalist, Stone Garden

I've been planning a garden over the last couple of months that has made me quite excited. The house itself is quite contemporary, and in a great setting. Its flanked on one side by 2 magnificent, verdant green fig trees, and on the other side by amazing views over Beechwood Golf Course and out to sea. Its quite close to the existing house next door, which makes for an interesting challenge in trying to soften the views from both sides whilst not creating too much shade.

The owner and the architect had some great ideas, which gave quite strong direction as to what the garden should eventually look like. They wanted to create an almost minimalist, oriental feel with rock and grasses. After several concepts, we settled on a simple approach to the design, which would would require some very large rocks, which would in turn compliment the natural stone that has been used as a strong design element in the house.

Our first step was to remove the alien vegetation on site, which would also open up the views from the house. This would also create more space for the main rock garden area.
Using the initial concept sketches, I finalised the design, and worked out the position and rough size of the rocks that we would need for the space. 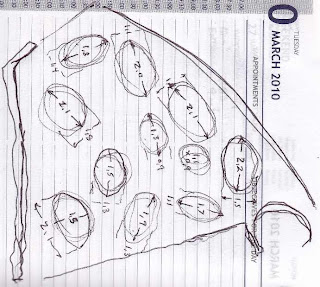 The drawings and sketches are more of a guideline to use when the choosing the rocks, because its quite easy to be overwhelmed by the size of the rocks when you're looking at them by themselves in a quarry.
The tendency is to choose smaller rocks when you're looking at the rocks by themselves. I went into the quarry armed with my sketches showing the shapes and measurements of the rocks that I wanted. I took photographs, and numbered each rock according to the position it was going to fill.

Even with all the preparation there are always a few slight hiccups. Unfortunately this job was no exception. The crane company I had hired to move the rocks got cold feet the day before the rocks were due to arrive. They were nervous because there was no way that we could know (and plan for) the weight of the rocks until they had been weighed on the weigh-bridge and were on their way to site. I had been given figures of anything from 1-7 tonnes per rock. Fortunately, after several anxious hours of phone calls, I managed to get a rigging company - Lovemore Brothers, to step in at the last minute (for a considerably higher fee), to handle the process of moving the rocks from the truck into position. 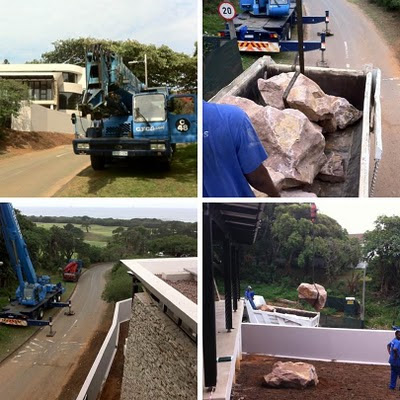 True to their word, the 55 tonne crane arrived at 7h30 the next morning. After several days of rain I knew that we had a window period of a few hours of good weather, so I began to grow quite anxious when I was told that the rocks were delayed by a broken down truck.

Eventually, at 14h30 the first load arrived, just as the clouds began to roll in. We worked quickly knowing that a storm was approaching, and that we had only a few more hours of light to get the remaining 16 tonnes of stone onto site. We finished the first load as the lightning began to strike around us. (An especially worrying thing when you have a 30-40m lightning-conductor sticking out above everything around it.) The very cold rain began soon after, which was just the precursor to the large hailstones that followed. It seemed like everything that could make our work harder, was going to happen. Fortunately, as is the norm with storms like that in Durban, it didn't last long. 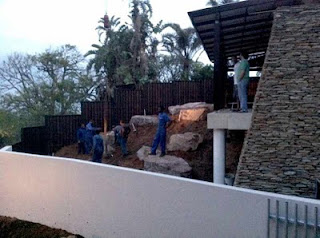 3 long hours later, the second load arrived - just 25 minutes before the cut-off time that Devan (the very capable rigger in charge) had put in place.
With the light fading, and the dangerous prospect of positioning 3 tonne rocks in place in the dark, looming quickly, we tried to work fast. But before we knew it, the light was gone, and we were literally positioning rocks by lamplight.

Next week, I'll do a follow up, showing the completed garden, with the rocks and plants all in place.
at November 12, 2010 6 comments: