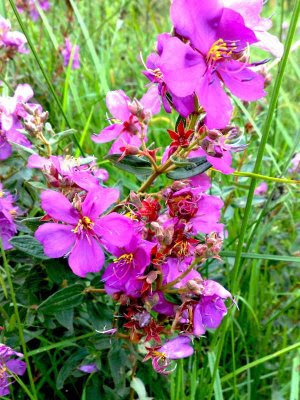 Dissotis princeps
Wild Tibouchina
Dissotis princeps is a wild and princely plant. It flowers off and on from the end of Summer right through to the beginning of Spring. Its an ideal plant in wet or damp areas in the garden, it flowers for long periods, and loves full sun. Its also an easy plant to grow, it grows very fast, and can be cut right back after flowering.

Its common name is the Wild Tibouchina because it looks similar to the Tibouchina we see in established gardens, but its also known as the Royal Dissotis, because princeps means 'princely' in latin.

Its been known to be used as an aphrodisiac, and been harvested as a vegetable in difficult times.
at February 26, 2009 No comments:

I was reminded again recently, what an amazing climate it is that we live in. With temperatures of 24-32*C (77-90*F) and plenty rain at night, the weather in Kwazulu-Natal is especially good for plants. I was visiting a garden that we completed about 18 months ago, and was surprised to see how much growth has occurred since I last visited. 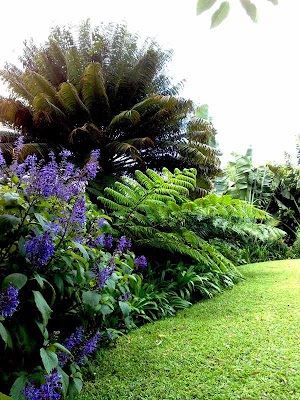 This was a tropical style garden, which was designed around an art deco home, it consisted of 3 levels, and 4 distinct areas. Unfortunately, the way the house is designed, it doesn't interact functionally with the garden very well, there are only 2 entrances into the garden, and neither make it very easy to just walk out into the garden. 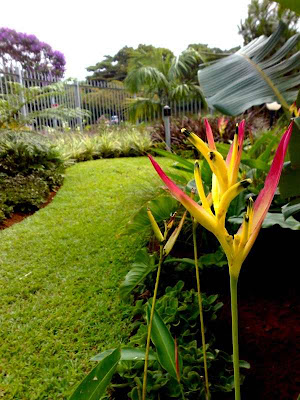 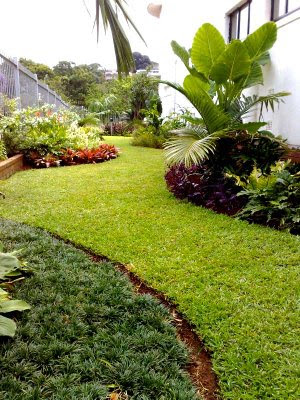 The garden is also very open to its surrounds - it is bordered on 3 sides by a road, and therefore needed to be beautiful when viewed from outside.
But at the same time a fair degree of privacy was needed to be able to enjoy the garden from inside. 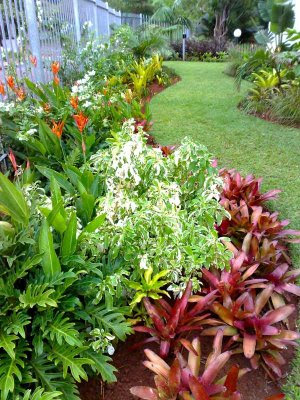 The plants were chosen for their tropical or colourful qualities - either bright flowers or bold foliage. I planted them in groups to show them at their best, but then planted plants with contrasting colours or texture close by in order to make the outstanding qualities stand out a little more. Its a style of planting that if its not done carefully can be too loud, and can result in a kitch, fruit-salad-type garden. 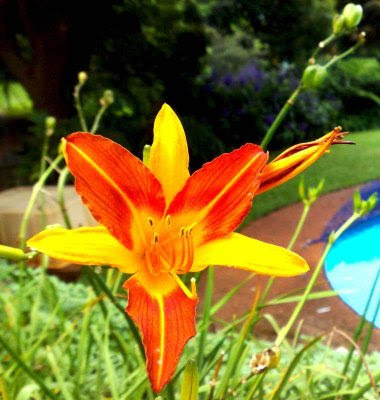 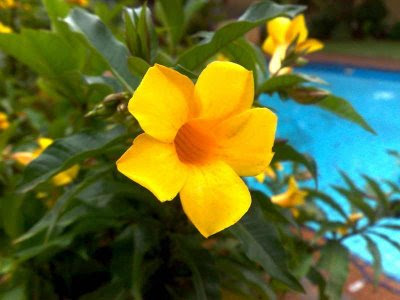 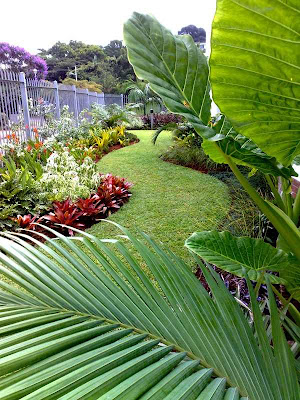 The garden would be half done if it only had interest when viewed from a distance. I chose plants that would pull you into the garden, down the winding grassy paths, and would be interesting to look at, would have a beautiful smell and would make you want to touch them.

I have explained a little bit more about the design in a previous post, as well as the sketches and before, during and after pics.
at February 25, 2009 7 comments:

Overlook a Baby Fig Tree at your peril... 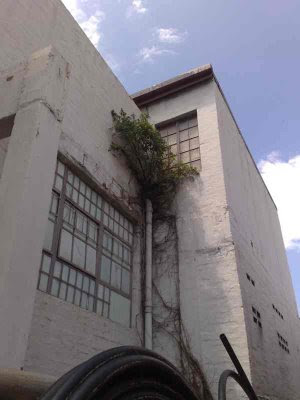 It doesn't look like much at the moment, but these amazing plants turn into massive trees - they grow so fast, that you can almost see them growing. Before the owners of this factory know it, half the side of their building will be in pieces. They're not called strangler figs or rock splitters for nothing! If you have one of these in any space smaller than an acre of open ground - be warned. You can see these silent vandals in action here.
at February 18, 2009 2 comments:

I recently found a great online way to show some of my portfolio of the gardens that I've designed and built. 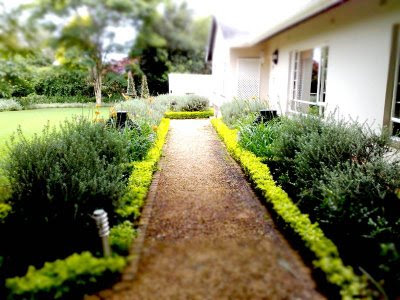 The website is called Carbonmade, and is quite simple to use, and looks great. You can take a look at my portfolio here, and if you want to sign up, go here...
at February 13, 2009 6 comments:

One of the first things, that I do when I am called in to landscape a garden, is to ask my client what their preferences are when it comes to styles for their garden. Most people haven't given it much thought before I ask the question.

There are several factors which influence the style, even before our preferences enter the picture:

The architecture probably has the biggest effect on how your garden should look. A cottage garden might not be ideal surroundings for a modern or contemporary building, however a minimalist feel might be far more harmonious with that type of structure.

The second biggest influence would most likely be the climate of the area. While not impossible, a tropical fern garden in the desert would require a lot of work to keep it looking good.

Another big factor would be the conditions on site. Is the area small or large; is it steep or level; is the soil predominantly clay or just plain sand? What does the surrounding vegetation or neighbouring properties look like. All these are questions that need to be answered before our particular tastes are addressed.

With the above influences in mind, the next step is to consider the individual tastes that make us who we are. Here are just a few things to think about:

If I were to ask all these questions when I first meet a client, the meeting would feel more like an interrogation. So I will often look at the interior of the house or building, the predominant colours and interior styles in order to get an idea of their tastes. Besides, a garden should be a reflection to an extent of the people who use the space, so most times, an informal discussion gives me more of a clue as to the personality of a person, and by extension, the type of garden that they would like.
at February 09, 2009 3 comments:

Stop and ask for directions

I'm not a big believer in being critical - you can accomplish so much more with a bit of gentle encouragement. I also believe that the best way to learn is by trying, and then learning from your mistakes. But most times, its best to ask for advice before you start.

I've been watching a new development busy growing over the last few months, and I've even snuck in on occasion to take a closer look. Although its in the middle of an established suburb, with beautiful colonial houses, its simple, contemporary feel looks good, and I was looking forward to seeing how they would finish it off. 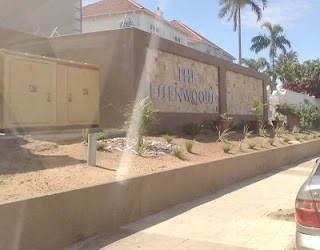 But its the finishing off that seems to have let the entire project down. To come so far, and then to do a half-baked job with the landscaping, makes the whole project look like a mess.

The planting on this front verge, really is a waste of time, energy and money. It would have been better off leaving the area as sand or weeds, or at the very least planting grass? All these plants would have looked great in a nursery in abundance. But to think that ±30 tiny plants will go any where towards covering the 60m2 of bare sand is a delusion.
None of them will spread out to cover the sand, or if they do, they will only cover the bare sand in about 50 years time. The pebbles will have disappeared into the sand in about a months time, and the pots will most likely be stolen in the next week. That all sounds quite cynical, but I've seen this same scenario so many times.

I know that these are tough financial times at the moment, and you have to look for areas to save money, but the problem isn't about money at its core - its about a lack of accurate or realistic planning. The building industry in general, never gives accurate costs or time frames - in most cases, projects go over budget and time by about 20-30%.

The result is that there are always compromises. Sometimes its the finishes in the interior that are compromised, and most times its the landscaping. So the very aspects of a project, that should be its consummation, turns out to be its scarring.

In the case above, maybe there were not enough funds available to do any meaningful landscaping, but for a fraction of the cost of what has been spent on planting and materials, (that should, and probably will be pulled out and thrown away) the developer could have gotten some good advice and some thrifty solutions which could have transformed this development.

Instead, they have got a blight on their property, and a terrible first impression.
at February 01, 2009 3 comments: