Behind The Scenes - Art Deco

It doesn't happen often, but every now and then, I visit a garden and have a design in mind for it from the moment I see it. This was one of those times.
I had been asked years ago by the previous owners, to give a quote to clean up this garden that surrounded a beautiful art deco home. They never took my radical advice on cleaning up the overgrown nightmare that had become their garden. 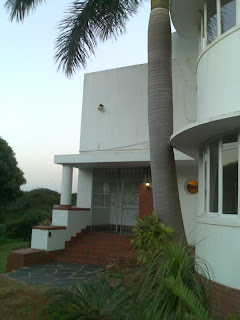 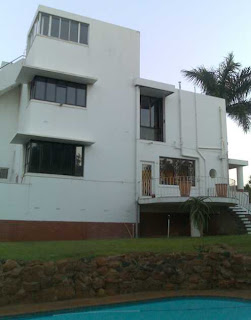 Then a couple I had done some landscaping for at their previous home, bought the place and called me in for some advice. They had already made the bold decision of removing most of the plants in the garden, and as a result, had been on the receiving end of a few disapproving looks from their neighbours.

We spoke about their needs from the garden. Privacy and security were big issues, as the house was surrounded by the road on all sides except one. They also wanted a relatively low maintenance garden that would also be a fun place for their 2 children to play and grow up in. 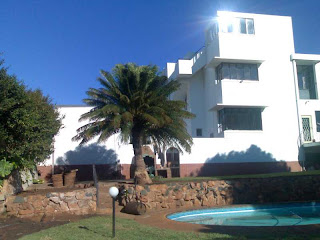 The biggest influence on the design was the strong art deco building, which sat strongly in the middle of the plot. The garden was also roughly split into 3 levels with a pool on the bottom level. The garden felt quite physically disconnected from the house - there was no easy flow from the house into the garden, but was still well connected visually. The terrace and windows all looked down onto the garden from above. 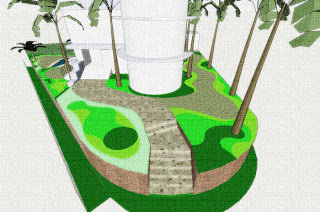 The garden definitely suited a Burle Marx approach to the design - with very strong curves, bold colour combinations and textures that would be appreciated even more when looked down at from above. My clients were fortunately quite trusting, and were happy with the initial sketches.

The budget for the garden was quite limited, with the restoration of the house taking obvious priority. We dug trenches and installed irrigation to lower the long term water costs and maintenance requirements. We had to drop the levels above the pool, and used the soil to raise and level the area around the pool. 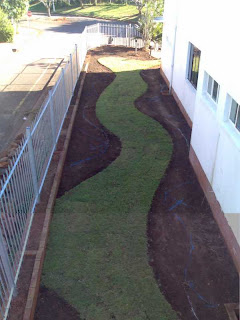 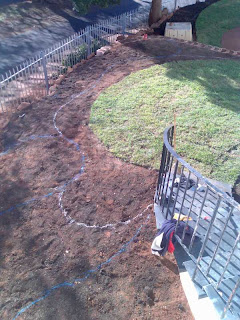 I drew lines on the ground to mark out the grass and planting patterns, and then laid the grass. We kept the existing Cycads and Cycas as feature plants, and used quite tropical style plants. They were planted in groups that contrasted with each other in order to emphasize their outstanding qualities. Some of the bright, bold plants that were used - Bromeliad, Heliconia, Alocasia and Sanseviera. We planted about 8 palms around the building to bring down the scale of the building, which would also not hide the uniqueness of the house.

These pictures were taken 6 months later: 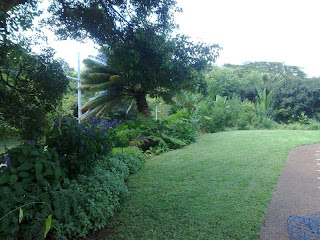 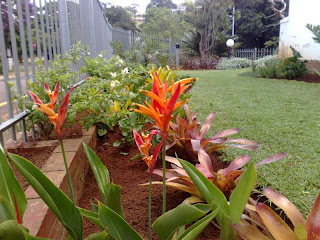 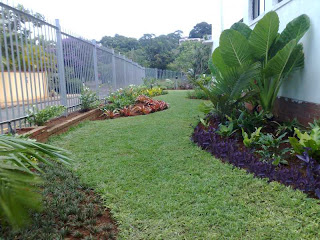 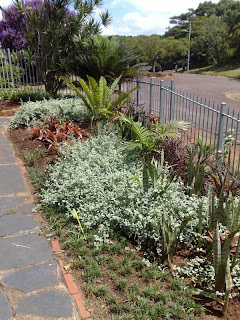 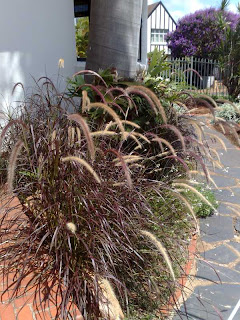