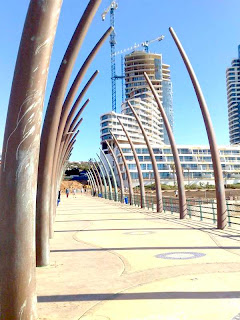 Umhlanga (the Zulu word for 'place of reeds') is a thriving coastal holiday town, within easy distance of Durban. Apart from catering to a regular influx of tourists throughout the year, it also has a large portion of permanent residents, and visitors from around the area. The beaches are great, with excellent waves for surfing, and rock pools for kids. There are amazing restaurants close by, and Gateway - one of the biggest shopping malls in the Southern Hemisphere is just at the top of the hill. But it has always had a bit of a run-down look about it. 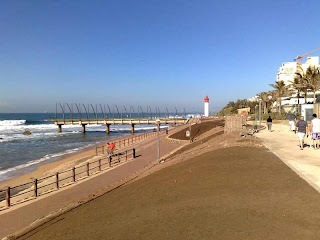 A few years back I did quite a bit of work in the gardens at some of the main hotels on the beach in Umhlanga. It always struck me that the walkway in front of the hotels, was an amazing asset, that was not being fully valued.
It should be an ideal place to go for a walk or a run, or to take your dog for a walk, but the walkway was uneven and narrow in places, and it was not very well lit at night. 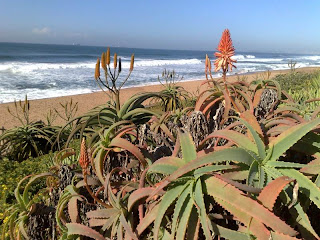 But recently, the municipality has been doing some improvements to the area. The entire stretch of coast has been re-designed to make better use of the beach, and to generally improve the walkway, landscaping, storm water run-off and access down to the beach. After the recent storms which washed away sections of the beach and dunes, retaining walls were built to prevent this from happening again. 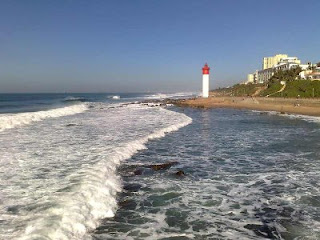 There has also been opposition to the changes - as there always is. But some of the residents of the area's concerns are valid - they have been worried about (among other things) the improved access resulting in more noise, increased amounts of vagrants, and worsening of security in the area. All of which can be controlled or mitigated if taken into account in the planning and design of the promenade. 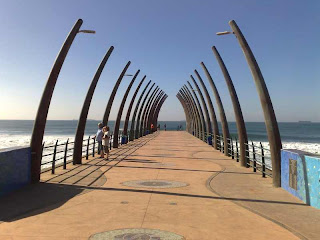 After taking a walk along the promenade yesterday - it is still under development - I was impressed by what has gone on since I last visited. The new pier with its whale bone structure looked impressive and gave a glimpse of what the finished promenade should look like. The promenade itself is wide and the finer details are pleasing. The planting is still being done, but a few of the hotels are also taking some initiative by improving and landscaping their access to the promenade. 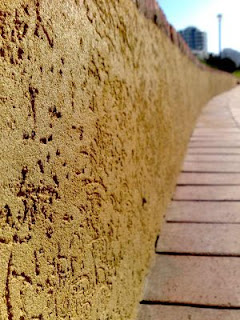 The retaining wall, along the length of the beach, although functional and necessary is the only aspect that I'm unsure of its long-term success. Any planting in the walls is unlikely to survive without a fair amount of maintenance, which I don't see happening in the long term. And besides I'm not sure how well the walls will stand up to stormy waves battering them anyway?

The finished Umhlanga Promenade should be an asset to the entire area when completed, and already people are using it. I was surprised to see how many families, walkers and runners were using it - even in its unfinished state in the middle of winter. I guess the glorious sunshine didn't hurt though?

Thanks Henrique, you can view my portfolio at earthlandscapes.carbonmade.com or on flickr at www.flickr.com/people/earthlandscapes/
Your sketchup drawings are well done...

I just discovered your blog after you "followed" me on Twitter. Excellent content and information. Just what I would expect from a designer!
Shirley Bovshow "EdenMaker"

Thanks Ross. About your question: It´s easier than "V-ray"...
Which plugin do you have? Do you have podium installed?

Hi Ross, how are you doing?
I suggest podium. Do you have any Instant Messenger? So we can talk about it. I have MSN.. just ask me.