The Roof Garden That Wasn't

I am convinced that the best design ideas come out of challenges. Obstacles are fertile ground for inspiration. Adversity encourages creativity. I believe that the reason why South Africa is so full of incredible, inspiring, inventive people is because of our troubled past, and our current challenges. So when problems arise, I'm learning to embrace their constraints rather than to try and circumnavigate them.

I had the fortune recently of meeting a new client with a wonderful enthusiasm for everything around her. It was a privilege to have a client with an eye for design and beauty, a love for nature and a confidence in my abilities.

The garden was a mix of various styles, with some interesting layers to it. The front garden although a little overgrown, had a lovely tropical feel to it, with some interesting plants that had been collected over the years. While the back garden was a fairly blank slate surrounded by some beautiful old indigenous trees, and a splendid view out over the Palmiet Nature Reserve.
The challenge in the garden came from the least expected source - the biggest part of the large open lawn was really a thin veneer of grass over a 1 foot thick reinforced-concrete slab! Not much chance of doing anything interesting there...

After giving it a bit of thought, and looking through the photos, I decided that the front garden didn't need too much in the way of redesigning. I would move some of the plants around, and take some out altogether to open it up and give a more open feel, and do some minor planting.

My approach to the back garden was to look at it as if it was a roof garden - which to all intents and purposes it was (without the building underneath), and cut my cloth accordingly. We would use mainly grasses and succulents that would be able to cope well with a shallow root system, and potential drought conditions, while at the same time encouraging even more birds into the garden.
My client was characteristically enthusiastic about the ideas and the way forward, so we began the project with the task of opening up some holes in the concrete in which we could plant some taller plants. At this point I had assumed that the concrete would be at the most 4-5 inches, and I was certain that it wouldn't have been reinforced.
It took twice as long as I had expected, and one jack hammer chisel head later before we managed to cut holes that I was happy with.

The rest of the project went more or less according to plan, and I think the final result worked really well.

We kept a section of grass on the right (where there is no concrete), for children to play on and to keep the open feel of the area, and we created pathways through the natural planting, one which led to a bench under the trees, and the other to a covered 'entertainment area' which we paved and incorporated into the garden using the same gravel as the pathways.

The Art in Patience

If I were to choose a word that would sum up the last few years, it would be that uncomfortable word 'Patience'. So many of the projects that I have been involved in during this period have involved some element of long term planning.
Again, a gardening analogy is most apt - the process of preparation and sowing seed in one season only to reap the fruit years later applies so perfectly to so many areas of this business. Looked at in a cautious light - forgetting to sow seed in one season can so easily result in a lean period years later.
One of those projects which I began nearly two and a half years ago, has finally come to fruition. You can read about the start here. Over the last few months we have finally been able to begin the planting of some of the common areas - it feels so good to get our hands dirty at last.
Originally on the actual site, there was a combination of grassland, aliens, and some garden escapes. But the site is nestled in between beautiful veld on the slopes below the Kloof escarpment, and the large riverine trees alongside the Umbilo tributary. The concept behind the design of the landscaped areas is an attempt to integrate the two vegetation types from within the park, but with an emphasis on grasses.
In the next few days, once we have finished - I will go into a bit more detail of what we have planted, with the whys and hows.
at June 06, 2012 2 comments:

Email ThisBlogThis!Share to TwitterShare to FacebookShare to Pinterest
Labels: Romead

I love talking with people who are passionate about what they do. There is so much you can learn from someone who is impassioned by their vocation/hobby/interest. I ran into just such a person the other day at a nursery. She introduced herself, and noticed that I was looking at the indigenous section, and before long we were having an interesting debate about the effect that the indigenous plant movement has had on gardening in South Africa.
She felt very strongly that the last decade of emphasis on indigenous plants has had a very negative impact on gardening in South Africa. She talked very caustically about gardening in 'Eco' Estates and pointed out the double standards that exist in the rules and regulations at these estates. She compared the move toward indigenous planting (rather extremely) to Nazism, and also to our unfortunate political landscape, and pointed out that fanaticism in any shape or form is usually unhealthy.

I agreed with much of what she said about the exotic vs indigenous argument:
I also agreed that we need to be careful about extremes of any form, even in the garden industry.  And although I am a firm believer in planting predominantly indigenous plants, I have always felt that there is space for exotic plants in the landscape.

But I think there was something that this plant enthusiast was missing about the ardour for indigenous plants...its more than just a superficial appreciation for the beauty of a plants flowers, its unique shape, or its interesting leaves. There is something 'true' about seeing a plant that is thriving in its rightful place. There is an undefinable feeling I get when I see a plant that fits in with its surrounding vegetation or environment. And while I agree that we need to be open-minded about our plant selection, in most cases an indigenous plant is the 'right fit'.

I walked away from our discussion with a better understanding of the exotic plant enthusiast, but I also left with a more firm love for indigenous plants.
at April 24, 2012 4 comments: 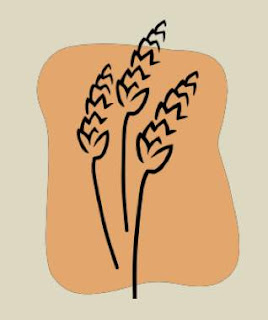 For anyone interested in Wild Grasses, I can highly recommend these courses: