Beautiful Dirt? It seems like a bit of an oxymoron, but, yes I think dirt is beautiful! Or at least it should be beautiful. Plants are just like humans, if you get their diet right, they will live long, healthy lives. They'll be less prone to disease, and will look good at the same time. 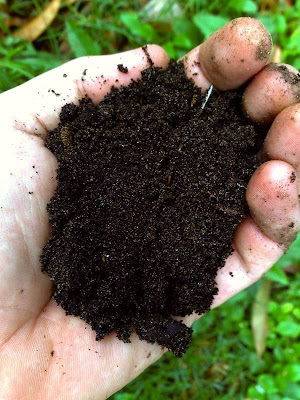 I've just given a soil sample report to a client, who's garden went through a bit of a rough patch around mid-winter. She called me in to look at the plants in a section of her garden that were looking a bit shabby, and in some cases were being attacked by aphids, scale and downey mildew.
Deciphering a soil analysis, is usually pretty daunting. The key is to know what you're looking for, and what all the figures mean.

The soil report for the 2 samples came back relatively positive, and this is what it looked like:

The report showed that a lack of Nitrogen (Cat2) would most likely be responsible for the poor health of the plants. The report shows that Phosphorous levels are very good, while Pottasium, Calcium, Magnesium, and Sodium levels are all healthy.
Clay content and organic matter is a little low.

Nitrogen is very low, and the pH is much too alkaline (most plants prefer a slightly acidic soil).

There is also the potential for deficiencies of micro-nutrients/elements such as Zinc and Copper, but this would be rectified by adding compost to the soil.

The overall best long-term solution would be to add regular large amounts of compost (as is usually the case) to all the beds, but particularly to the bank area below the house level. This will boost all the levels, but will increase the amount of organic matter in the soil, which in turn will help retain moisture and increase the plants abilities to absorb nutrients.

If chemical fertilizers (a short term solution) are used to boost nitrogen levels, then it is best to use Ammonium Sulphate Nitrogen (27%N) or ASN as this will help improve the pH slightly.

In general this specific report and remedial feeding of the soil could probably be easily applied to most of the Durban coastal surrounds.

The key to healthy plants is in the soil. If you can get the soil right, you take most of the irritating work out of the garden. Its also not something that you are ever finished with. Adding compost and feeding your soil should be a regular process, especially in areas like ours, with sandy soils and high rainfall. Most nutrients leach out of sandy soils very quickly.

But even clay soils can benefit from copious amounts of compost - it helps soften the soil, and reduces compaction. In short, you can never really add too much compost to the average garden to get beautiful dirt, and as a result - beautiful plants.
at November 18, 2008

Ross - great post! Not the sexiest topic in the garden, but certainly one of the most important. I'm curious if you use mycorhhizal fungi in your arsenal. It's become a regular addition to the new plantings we do in Santa Barbara's parks and I'm seeing some really great growth in all our new plantings. Time will tell if it's the silver bullet.

I totally agree with Garden Wise Guy. Dirt may not be sexy but it's the most important thing to enjoying your garden. Because if the soil is good, the plants will be good, and thus the gardener will be happier not having to work so hard. I'd love to hear about the fungi. A silver bullet would be a most fortunate thing. :-)

I don't use Mycorrhizal fungi - I wouldn't even know if you could buy it here in SA. But I have heard about the amazing benefits that it has. How do you use it?