Getting Control Back From The Aliens

Getting control of Alien vegetation is an important subject for any gardener in South Africa. Our water resources and indigenous plants are under threat, and we all need to learn to identify and remove invasive plants whenever we find them. Fortunately, we have a little help that reminds me a bit of the plot from The War of the Worlds.

The other day, while driving, I spotted a very unhappy Opuntia growing on the side of the road. It looked as if its life had literally been sucked out of it - and looking closer, it had! 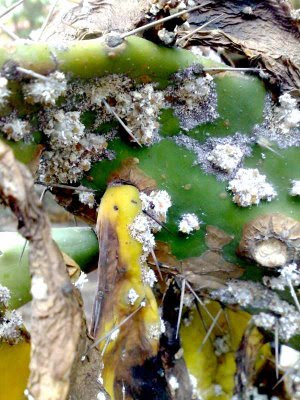 Thousands of tiny bugs called Cochineal insects had latched on and were pushing their little beaks into the plant. They were quite rapidly killing the plant by sucking the sap out of it.
This way of dealing with weeds is called biological control, and South Africa is one of the top three countries in the world when it comes to this method of invasive plant control. Since 1914, we have introduced over 80 species of biological agents in order to control or destroy the invasive plants that thrive in our ideal conditions.

The concept behind biological control, is that because invasive plants are in a very strong position in a new environment with no natural enemies, the playing fields need to be levelled. The best way to do this is to introduce their natural enemies from their countries of origin. this either destroys, or helps manage the burgeoning alien populations.

Biological control is an ideal way to get rid of invasive weeds, because:
Obviously these biological agents need to be introduced extremely carefully, and there are very strict controls in place to make sure that there are no unforeseen results. It doesn't work in all situations, but there has been excellent results with Water Lettuce, Port Jackson Acacia, Red Sesbania, and of course Opuntia.

Something else to think about, is that this little Cochineal insect can also be harvested to make a crimson dye which is sometimes used in food colouring. Try not to think of that next time you're eating food thats been dyed red!
at April 06, 2009

this is very cool but how do you stop the insects from killing indigenous plants? if they destroy all the aliens will they not then move onto something else?

As long as it isn't Sudan Red I'm okay with it.

Are there any comprehensive online catalogue (with pictures) of South African alien invaders?

No, they are quite plant specific. There are intense studies done on all susceptible indigenous plants before they are released, and in some cases they don't last through our extremes of seasons, so its quite safe.

Fortunately its not Sudan Red! Apparently it is used because there are almost no possible side-effects.

I don't know of an online catalogue, but will have to do some research to see if I can find something?

Ross: good work you're doing here. Spread the word on sustainable controls. The closer we can get our gardens to emulating natural systems, the better we'll be. Have you seen the new Sustainable Landscaping for Dummies book by Owen Dell? Must read.

BTW: thanks for your comments at my blog. Didn't know you were into nostril hairs. I'm creating a cable network dedicated to the subject.

Give psoralea a chance. Then you won't need a scratch-and-sniff monitor.

How do they make sure that the introduced natural predators don't become too prolific, having no natural predators of their own in the area? Do the population numbers just kind of dwindle as they eat all the invaders and their food disappears?

Thats exactly right - if during the testing stage, there is any potential for them to spread to other plants, they wouldn't be released. But usually one of three things cause them to die out: lack of food, harsh climates or new predators.