Behind The Scenes - A Restored Guest House Garden

I've been working on the designs for a garden since the end of last year, for a beautiful old house high up on the ridge of Berea. I've driven past the house quite often in the past, and wondered when or if it would ever be renovated. 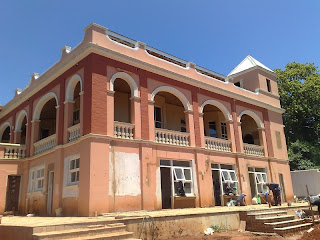 Last year, the owners of a guest house down the road took on the honourable task of restoring it to its original beauty. From white ant nests in the walls (which were held together in some places not with cement, but hard clay), to leaking roofs - I'm not sure if they realised the amount of work that was in store for them when they began. But they've taken to the task admirably, with the deadline of being ready for the 2010 World Cup looming.

My clients were incredibly trusting, and have allowed me quite a bit of freedom with the design of the garden. I felt obligated to make sure that the garden was a suitable adornment to the soon-to-be renovated house.

My first thoughts were that the garden needed to be terraced to make it more usable. A slope, even just a slight one can make it hard to use an area, so I prefer to level out a space to make it more inviting, and at the same time, allow it to be have multiple uses.
I also felt that because this back garden area was quite low down and there were no real views to make use of, the garden should be inward rather than outward looking.

The ideal way to do this would be to create a central focal point, and possibly screen the outside views with hedging, creating something close to a cloister garden.

The other aspect to bear in mind is that the garden will be viewed from above almost or more often than from inside. So it would be necessary to create a garden that would be as beautiful when looked down at from above. I believe the garden will have a very different feel when people take the time to walk down into it, than how they will perceive it from above. When you stand on the verandah on the main level, there is a great feeling of space and openness with views to the North West. You will look down onto a garden with a strong axis, focal points, and a lot of colour but it will still feel very open. Once in the garden it will feel far more introspective. 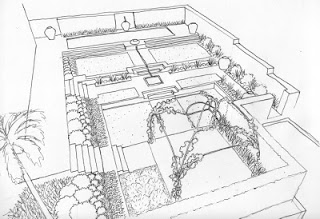 I thought the space would also lend itself to outdoor weddings, so in the long term it would be ideal to have an arbour on the lower terrace, which could also double-up as a shady outdoor eating area. A swimming pool in Durban is an absolute necessity. I positioned a long narrow pool on the top terrace, and then linked it with a rill to the main focal point which is a central fountain. Running water also helps cut out some of the faint sounds of traffic.

I wanted the garden to provide abundant cut flowers to be used in the guest house, so there will be a strong focus on flowers, and colour.
at February 09, 2010

Looks like it will make a lovely transformation, you will have to post some pictures when it has been constructed.

Love your sketch Ross. I should do more hand drawings. Can't wait to see the end result.

Oh Ross, what a beautiful building! Your garden sounds perfect for it. Are you basing plant choices on what it would have been like when it was first built, or using som eother criteria?

I am so curious to see what the indigenous plantings you use look like. They will certainly be different than the plants that I can use in a New Jersey climate. Can't wait.....

I'm catching up after quite an absense,Ross! This seems like a dream project, made better by the fact that it has an economical as well as an aesthetic motivation. Hope all is going extremely well, with minimum frustrations! (Does it ever?!;)...)