Black Mambas, Ticks and Other Tenants

In this business, you get to meet all kinds of people. You get to see them at their best and their worst. This last week, I met a lady with such inspiring strength. A few years ago, her and her husband bought a plot of land in Forest Hills - an area of Durban that borders on the Krantzkloof Nature Reserve, and proceeded to build a house on it. During the build her husband passed away, but with a determined spirit, she continued on to complete the home.
As we walked around the garden, she spoke about how difficult a process its been, dealing with all the frustrations and challenges that come with the normal building of a home. This place is however, not what most people would call normal - because of its out-of-the-city setting, it has a few extra residents that come with it.

When I first arrived, I recognised the property from my childhood as a place where a friend and myself would explore in the afternoons after school - we would build forts and make paths through the overgrowth. Actually now that I think about it, it was all good preparation for my future interest in gardens and indigenous plants.
Very little had changed since then, just a few more houses in the area, but otherwise it was still very much the same wilderness. 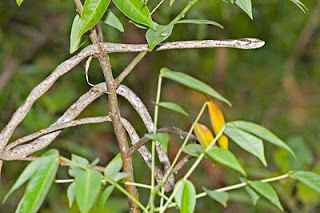 Vine snakes camouflage themselves amongst branches to catch their prey
As this intrepid lady and myself walked around looking at the property from its various aspects, I was excited to see how passionate she was about keeping the property as natural as possible. She was also very keen to make the best possible use of the rocks that had been dug up and stockpiled in a section to the side of the house.

It was as we blithely began walking towards the rocks with the grass up to our waist, that she began to tell me of the creatures she was encountering in the garden. The smallest of which were the ticks, which she warned me to check my legs for when we were done. Sure enough within a few minutes, I was picking the flat-bodied blood-suckers off my legs, and trying to pick routes through the grass that entailed as little brushing against grass as possible. Ticks love to loiter about on grass, waiting for animals (usually 4-legged) to walk past so they can hitch a ride and a meal.

The second account she told me, was how some time before, as she boldly pushed through the grass exploring her beautiful piece of land, she reached out to remove a pine branch in her way. As her fingers went to close around the branch, a little voice told her to look at it more carefully. As her eyes followed the stick along its length closer and closer to her body, up to its end right in front of her chest, she saw that its end was actually the head of a highly venomous vine snake! At this point, she screamed and ran in the opposite direction. I'm sure the snake probably did much the same - with less screaming and more slithering (although they are venomous, they rarely bite). Needless to say, she walks more circumspectly through the garden now, and usually carries a stick to part the grass in front of her.

The story that made me the most nervous though, was how she had been sitting on her verandah enjoying the view, when she noticed the head of a black mamba rise up out of the grass. As she watched, it rose further and further until it reached the lower branches of a tree a few metres off the ground, and then proceeded to make its way up into the tree. Apparently some snakes can use a third of their body to stand up above ground. So that being the case, this black mamba must have been pretty large.

Black Mambas are reputed to be territorial, and can be quite aggressive in certain circumstances. Their venom is also some of the deadliest in the world. Fortunately she told me this story when we were just about done walking through the garden. Even if we weren't finished, I might have found a reason to observe the garden from a more "elevated" vantage point.

I left the meeting with an excitement for the potential that I could see in this garden, and a huge amount of respect for a lady who obviously has a lot of guts and determination. That she's able to complete this project in spite of some difficult circumstances, and not waver in her vision for a natural garden where wildlife is welcome. If only there were more people in this world with her indomitable spirit.
at March 23, 2010

She has more guts than I do. I got the shivers just reading about the black mamba lifting itself into her tree. I suppose I'd take to touring the garden in a suit of armor.

I'm with you Christine! Also, considering that we've recently had 2 incidents of black mambas biting people. If we do end up doing any work in this garden, I will be treading very lightly...