On a recent trip to Vernon Crookes Nature Reserve (which is beautiful at any time of year), I had a chance to take some photo's of this beautiful Helichrysum. Its not a very common garden plant, which is hard to understand when you see the large yellow flowers that rise up above the veld. I really had to fight hard to resist the urge to take some cuttings! 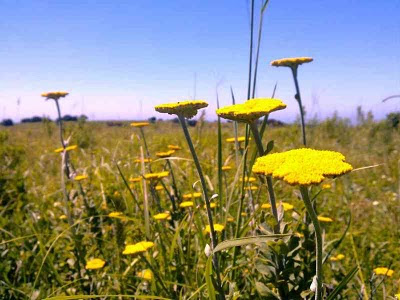 Helichrysum umbraculigerum
Actually, as with many Helichrysum, the 'flower' is actually an umbel. This is basically a collection of tiny flowers that all rise from the same point on a stalk, and form a flattish top - think umbrella. They remind me of little landing pads for insects flying over the grass in search of food.

Its a fast-growing perennial with hairy grey-green leaves. It flowers towards the end of Summer, as most other flowers are starting to go to seed. It reaches about a metre in height, and spreads out about 1 metre wide.

It looks spectacular when planted in large groups.