While clearing some branches and cutting down an alien invasive Syringa tree, I noticed this amazing plant growing on the branches of the Syringa. It's common name is 'Lighting Matches', for obvious visual reasons. 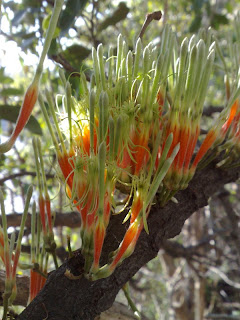 Tapinanthus
lighting matches
Its a type of mistletoe, and is hemi-parasitic. This means that it uses the sap of the host plant that it is attached to, as well as creating its own energy from photo-synthesis. In most cases it won't kill its host, but if in abundance on a single tree, it may weaken its host, making it prone to diseases.

It is spread by birds which eat and regurgitate its extremely sticky fruit, the fruit usually lands on a branch, which then attaches itself by sending out 'roots' into the branch.

The fruit is also used to catch birds, by being chewed into a sticky pulp which is then spread on the branches of trees. Birds get stuck to the glue, and are then quite easily caught.

It is not easily spotted, as it blends well with its hosts leaves. However in winter when the host loses its leaves, and it begins flowering it is quite easy to see.

It might be a great environmentally friendly way of dealing with the Syringa I need to cut down - spread enough of the Tapinanthus onto its branches, and weaken it, so that it eventually dies on its own?
at July 02, 2008