Today is a public holiday in South Africa - Youth Day. It commemorates the start of the Soweto Uprising in 1976, when school children were protesting against being taught in Afrikaans. The police opened fire on them and several children were killed and injured. This is the photo by Sam Nzima of the dying 12 year old Hector Pieterson, which became an iconic image of that day: 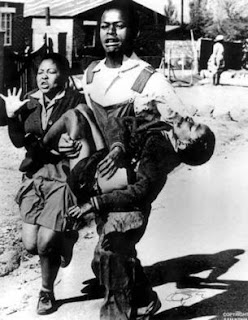 On a less serious note, I'm sitting down today to plan my stand at the Green With Envy Garden Show. The theme is "The French Courtyard". Fortunately thats a fairly open theme I think?

French Gardens are typically formal with topiary, ornate statuary, hedges and water features. But courtyards were generally less formal and were used for culinary purposes, for storing food plants and imported plants which could be given the extra attention they needed. So I think/hope there is a certain amount of freedom of interpretation. 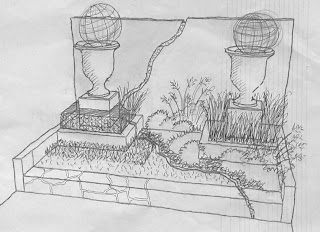 This is my first sketch, the idea was meant to compare a more formal french style with a natural/indigenous style. They would be separated by a plant/moss filled crack. It didn't get the thumbs up from my wife (my best critic), so I'm moving on.
at June 16, 2008